The most ardent  “rail bird”  will find Jaimy Gordon’s description of the world of horse racing at third-rate, down on their heels race tracks absolutely illuminating, intriguing and at times both sad and downright hilarious.   You will also find it surprising that Jaimy Gordon is not a rail bird at all but rather a college professor.   Her vivid portrait of the world or “underworld” of horseracing has earned her the National Book Award for Fiction. 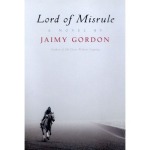 You will  not find a Seabiscuit or Secretariat story in Lord of Misrule.  No heroes here. Only no-name horses, jockeys, trainers, hot walkers, grooms, blacksmiths, promoters and owners struggling, cajoling, doing whatever necessary to make dinner!

No one in the grandstand, at the window or even on the rail  in Lord of Misrule has an inkling of what is going on in the barns behind the track. The side deals, the fix, claimers,  stalking horses, ice buckets, butte, you name it and Jaimy Gordon makes it real.   Her characters, mostly a tragic lot, are the personification of a world known to very few. The author has uncovered the grimness of horseracing, and the pathetic daily lives of those who survive in this gritty world.

Lord of Misrule is a fast read but the book will capture you long before the first race. A bit of history from Wikipedia.   In Britain  in the sixteenth century, the Lord of Misrule was an officer appointed by lot at Christmas to preside over the ” Feast of Fools!”   Appropriate title, Jaimy.