This is a personal Memoir by the editor of Gordon’s Good Reads. Rocky Road To Dublin is now available at Amazon.

A young boy grows up during period of innocence in the womb of a small Massachusetts town. His bucolic world implodes with the tragic death of his mother opening the pathway to an incredible story of trust and love between a father and son. 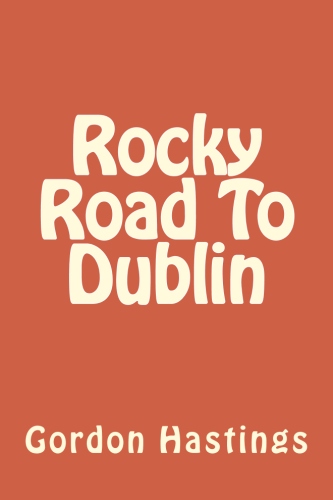 This extraordinary dad was neither a captain of industry or master of the universe. He was an unassuming man of modest means and little formal education. He proudly carried his lunch pail every day and dedicated his hard labor and his life to his family. He met the challenge of a family tragedy armed only with his native intelligence, honesty, loyalty and love. He was victorious even in his own death.

The Hastings’s were a typical small town rural nuclear household, mother, father and three children. The father teaches life lessons by his own example. He is intuitive in recognizing his son’s anxieties and panic attacks. Everyday chores become adventures that lay the groundwork for an abiding trust that they will soon rely upon heavily. The 1940s and 1950s in this small neighborly New England community are a time warp but the lessons learned there resonate.

The predictable routine of a secure childhood is dashed by the unexpected sudden death of the boy’s mother when he was eleven. Dad, a factory worker, overnight at age fifty-two is catapulted into becoming a single parent of three children all under sixteen. He must keep his family together knowing that his youngest is the most fragile of all.

Father and son create a life filled with simple yet great truths about dealing with life’s travails. They bring out the best in one-another as a dad dedicates himself to giving his son confidence and encouragement. He gently nudges his boy away from the confines of a small town and into a future of which he once dreamed for himself.

Then it becomes the son’s turn, as he must cope with the tragedy of the father’s untimely illness and death. The wonderful memories of their life together nourished their final hours.