A look behind the closed door…many doors….many lives….all intertwined in Crosby, Maine, as small as a Maine fishing community gets. Olive Kitteridge is story of the young and foolish and of the crusty and stubborn. A novel of worn out love dying the death of boredom but then flushed with moments of unthinkable, improbable excitement in the dwindling daylight of Maine’s long winters . Elizabeth Strout offers a full menu of characters afflicted by nearly all of modern life’s life’s travails. The novel was deemed worthy of Pulitzer following its 2008 Publication.

Also by Elizabeth Strout Abide With Me and Amy and Isabelle.

Tommy Orange’s debut novel There There starkly reminds the reader of the certain truth, there is no going back.  For American Indians “There” is no longer.  Some try to make the best of circumstances, many do not. 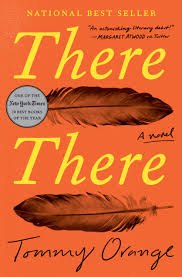 Orange’s thirteen Native American characters who have been born into or transported themselves to city life creates a poignant and melancholy reality.  Visions of their heritage, a There There, are intertwined with harsh reality. This creative story teller brings a voice from over the centuries delivering a stark message for contemporary America.

Orvil Red Feather stands in front of Opal’s bedroom mirror with his regalia on all wrong—he moved in front of the mirror and his feathers shake—-he worries suddenly that Opal might come into her room—Opal had been against any of them doing anything Indian—she treated it like it was all something they could decide for themselves when they were old enough—Indianing.