Gordon’s Good Reads does not make a practice of reviewing movies but when a film is based upon a book that I have enjoyed, written by an author in whom I have the highest regard, I broaden my license. Doris Kerns Goodwin is among the country’s most respected presidential historians. Goodwin’s book Team of Rivals, upon which the movie Lincoln is loosely based, falls into the category of an intimate study not only of Lincoln but also of those with whom he surrounded himself in his cabinet.

I read the Goodwin book and also the early reviews of the movie Lincoln so I had some idea of what to expect before seeing the picture. I understand that the movie was about Lincoln’s political genius but I left the theater wondering what impression anyone who had not read Team of Rivals would have come away with. They certainly saw an excellent performance by Daniel-Day Lewis and learned how the Thirteenth Amendment was passed, but was this the Lincoln they expected to see? Did the movie leave too narrow an impression for such a broad title? I think so.

Lincoln is depicted as a brilliant politician pursuing whatever tactics necessary to pass the Thirteenth Amendment, abolishing slavery. Missing from Lincoln was the remarkable story of the end of the Whig Party and the evolution of the anti-slavery Republican Party. Goodwin’s book fills in the important detail that positioned Lincoln for the 1860 presidential nomination including the Lincoln-Douglas debates of the 1858 senatorial campaign and Lincoln’s Cooper Union address in New York  in 1860. Equal to Lincoln’s brilliant political strategy in getting the Thirteenth Amendment passed was the fact that he won the Republican nomination by defeating the heir apparent, William Seward, which laid the basis for Lincoln bringing all of his challengers for the presidential nomination into his cabinet. The Goodwin book details how the interaction of this disparate group influenced Lincoln’s conduct of the Civil War. The film’s short clips of Lincoln viewing battlefields and Lee’s surrender did little to place the enormity of the Lincoln presidency and his team of rivals in context. 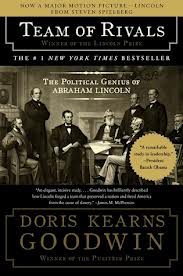 There is no doubt that Daniel Day-Lewis is on track for a Best Actor nomination and that the film will be among the nominees for Best Picture but the title Lincoln was a huge reach and likely a disappointment for many. Would you title a movie The Civil War and only tell the story of Gettysburg?  On the other hand, if Spielberg had instead titled the movie The Passing of the Thirteenth Amendment, would anyone have come? I get it. It will take a five-part Ken Burns PBS Series titled Lincoln to fill this history buff’s canvas.

One thing for sure, the film has provoked a great deal of talk from the pundits about a president’s need to be very much a politician in order to attain lofty goals.  As the nation again approaches the edge of the partisan fiscal cliff the timing of the release of the film and renewed interest in Team of Rivals could not be better! Maybe the narrow focus of the movie is a good thing after all!  Required congressional viewing?