All of the glory and  drama of the 2004 and 2007 championship seasons and the collapse of 2011 are played out within the intrigue of the relationship between Francona, Theo Epstein and the Red Sox ownership trio of John Henry, Tom Werner and Larry Lucchino. Certainly this is a book for Red Sox fans but like  Moneyball  by Michael Lewis it provides wonderful insight into the inner workings of major league baseball. FRANCONA  also offers an inside look at Terry Francona’s personal life, his relationship with his Dad and his struggle with major health issues resulting from injuries during his career as a player.

Why did the downfall of the Red Sox occur after the incredible accomplishments of 04 and 07?  The narrative makes clear that winning the World Series in 2004 was all about the sport  but following the repeat victory in 2007 it became all about the money.  The Red Sox franchise at the behest of ownership became money machine in which everything Red Sox was for sale. When the performance on the field faltered in 2008 and 2009 and television ratings on the club owned cable channel began to plummet the financial concerns from the front office further impacted the play on the field. By 2010 fan and media pressure for another championship became so intense that the quick fix was to adopt the New Yankee strategy of throwing money at the problem. The result was the John Lackey, Carl Crawford  disaster and the ruination of Francona’s ability to control, the club house ethos.

FRANCONA is clearly a thinly veiled rout of the Red Sox top brass with Larry Lucchino receiving the bulk of the wrath. However, there is much in this book that reflects wonderfully on  the game and the Boston clubhouse culture established by Francona when he arrived from Philadelphia catapulting the Sox into  two World Championships.  Clearly, Tito and Dan Shaughnessy leave the impression that Terry Francona is a  “players manager”  and the perhaps best ever in the most difficult managers spot in all of baseball.  It was an impossible position for Bobby Valentine to fill in 2012 and Valentine quickly fell into the trap of making all of the wrong moves with Tito’s boys.  Will John Farrell have better luck?  As Francona’s former Red Sox pitching coach he has a better understanding of the culture,  ownership,  fans and the Boston media. What about Francona in Cleveland?  We will see how the “player’s manager” will perform. However, we can guarantee a hero’s reception when the  Tito and the Tribe arrive for their first game at Fenway this spring. 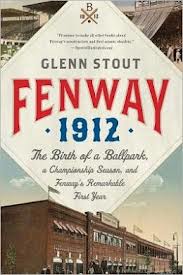 By the way for avid  Red Sox and all baseball fans read Glenn Stout’s FENWAY 1912, The Birth of a Ballpark.  Baseball in simpler times!  Refreshing!