The Other Boleyn Girl, written by Philippa Gregory and published in 2001, is among the very best novels written about Tudor England and King Henry VIII.  If you have not read this great novel place it on your must read list.  This true story about Mary Boleyn, the younger sister of Henry the VIII’s second wife Anne Boleyn, is remarkable in many ways.   The book enlightens the reader not only of the history of the period but it portrays an accurate glimpse into how women, even in their teens, were used as pawns for both power and pleasure. 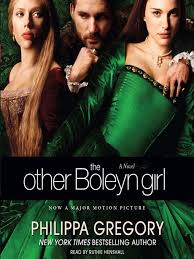 This is the story of Mary, the first daughter in the Boleyn family to be offered to a King in return for the hope wealth and power. So driven was this family that when Mary’s star began to fade in Henry’s ardor , sister Anne pushed her aside to eventually become Queen Anne.  Although you may know how that romance ended, believe me, the writing of Philippa Gregory will  capture and fascinate you through the final page. This story of two sisters and a King is also a study of the structure of society in 16th Century England. It is not suprising that Philippa Gregory is a recognized authority on women’s history.

Tudor England was  fascinating and this blog has focused on many enjoyable reads set in that period, including the  great British novelist C.J. Sansom and the Shardlake series. Another wonderful work of historical fiction written of an earlier period, Medieval England, is Anya Seton’s Katherine.

After reading the Other Boleyn Girl I ordered the  2008 movie through Netflix.  The movie does not come close to the book’s more intricate story line and I would strongly suggest that reading the book is a must before watching the film.  Once you have read the book it is worth watching.