Stephen Budiansky’s scholarly book CODE WARRIORS, NSA’S CODEBREAKERS AND THE SECRET INTELLIGENCE WAR AGAINST THE SOVIET UNION is a detailed history of the NSA and the historical herculean and expensive effort to crack the codes and cyphers of the enemies of America dating back to pre WWII.  From the successful breaking of the German Enigma code to intercepting and deciphering war-time radio signals, Code Warriors details the massive U.S. intelligence  gathering mechanism that blossomed into a billions of dollars bureaucracy complete with the intrigue of politics, fighting factions and competing egos. 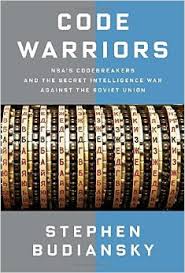 Budiansky’s impeccable research sets the stage for today’s headlines as the world of hacking and high speed computers has replaced machines that mechanically spun alphabetical and numbered wheels to crack codes of friends and enemies alike.  The author’s pages are not always kind to the  NSA or the CIA.

It almost seems simplistic  that America once constructed huge antenna arrays worldwide to capture information  sometimes with questionable legality. Early satellites intercepted radio signals and a tunnel under the Berlin Wall tapped into Soviet communications.  America spent additional billions safeguarding its own classified military and diplomatic messaging but the Soviets kept pace and the information race equalled the arms race. It all came under the umbrella of signals intelligence.

While Alan Turing and a staff of hundreds took months to crack the German codes at Bletchley Park, today lone wolf hackers invade secret government and private  files with the impunity of key strokes.

Budiansky details the NSA’s obsession with capturing every possible syllable of signal intelligence and then attempting to decipher and make sense of all of the information. The book begs the question as to whether NSA codebreakers have also become hackers as the narrative  transcends  current events.

Code Warrior’s is  valiant in its effort to make highly technical material  understandable for the layman and place the subject in the context of its vital importance in the major world events of the past seventy-five years.