Fellow New Englanders, also from Massachusetts, General Rufus Putnam and the Reverend Manasseh Cutler pioneered the first settlements along the Ohio River near present day Marietta, Ohio.  Both men are also credited with prohibiting slavery in the future Northwest Territory states of Ohio, Indiana, Illinois, Michigan and Wisconsin.  McCullough’s book is the story of these and other pioneering families and their descendants who settled the American frontier west of the Allegheny Mountains. The research is impeccable and the storytelling is classic David McCullough.

I came upon an earlier McCullough book that I had overlooked.  BRAVE COMPANIONS  is the well told stories of remarkable individuals who have contributed greatly to the American landscape: Amazon River explorer Alexander von Humboldt; Harriet Beecher Stowe and the impact of Uncle Tom’s Cabin; Frederic Remington; Louis Agassiz of Harvard; The Lindbergs; Harry Caudill a lawyer who opened to the world the tragic stories of Appalachia; David Plowden the photographer of vanishing America. David McCullough illuminates these uncommon individuals. BRAVE COMPANIONS is a short but marvelously enlightening read.

” How can we know who we are and where we are going if we don’t know anything about where we have come from and what we have been through, the courage shown, the costs paid, to be where we are?” David McCullough, BRAVE COMPANIONS, 1992. 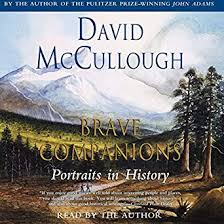