Yesterday we noted Doris Kearns Goodwin’s No Ordinary Time, during our President’s Week picks.  Today she gets another nod with Team of Rivals  the wonderfully chronicled story of Lincoln’s bringing into his cabinet his four leading opponents for the Republican Party presidential nomination in 1860.  William Seward was named Secretary of State, Edwin Stanton, Secretary of War, Edward Bates, Attorney General and Salmon Chase, Treasury Secretary. 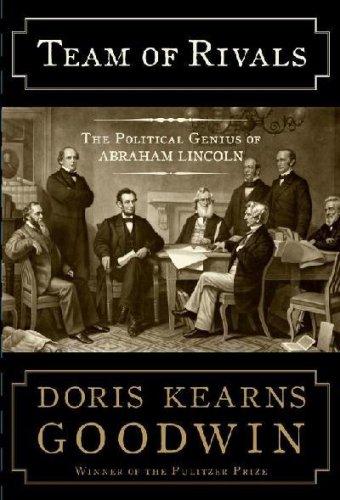 What is considered a brilliant move by some historians was not without its acrimony and behind the scenes dealings not altogether helpful to the new president.  Goodwin is brilliant in telling this story as it unfolds during the lead-up to the Civil  War.  It is a wonderful look at this period of American History from inside the president’s cabinet and offers tremendous insight into Lincoln’s thought process during the war.

Like to much of Goodwin’s writing and research Team of Rivals is relevant in its lessons for today.

It is no surprise that Team of Rivals brought Goodwin another Pulitzer.