Jon Meacham is back on my blog today with another great book on the American Presidency, American Lion a biography of  Andrew Jackson, the eighth President of the United States ( 1829-1837).   Reviewers  generally agree that American Lion is a definitive work on the Jackson presidency. I will readily admit that I knew little detail about Jackson before picking up this Pulitzer winner and I remain thrilled that it was recommended to me. 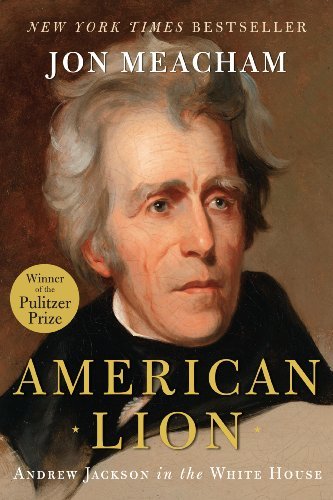 ” Old Hickory” was one of the more incredible characters  to ever inhabit the White House.  He was a zealot in his beliefs and in particular hated the Bank of United States which be believed was the basis of past, present and future corruption in America and a threat to the Federal Government itself.  He was a staunch  states rights advocate, believed in the sovereignty of the individual but at the same time believed that the Federal Government was essential!

There was no contradiction in the zealotry of his Indian removal policy. In 1830, just a year after taking office, Jackson pushed a new piece of legislation called the “Indian Removal Act” through both houses of Congress. It gave the president power to negotiate removal treaties with Indian tribes living east of the Mississippi. Under these treaties, the Indians were to give up their lands east of the Mississippi in exchange for lands to the west leading to the black-mark on his presidency and the nation itself,  “The Trail of Tears.”

Despite all of the controversy that surrounds the Jackson presidency he in reality created the foundation of the modern-day Democratic Party.  He is considered by historians to be the first ‘populist” president.

American Lion is a marvelous journey for the reader and once again Meacham exhibits excellence!  No matter how much material Meacham covers, his work is always manageable.