The dust cover of Richard Flanagan’s new novel The NARROW ROAD to the  DEEP NORTH, describes the book as a ” Savagely beautiful novel.”  I think not, but who am I to disagree with the rave reviews from the New York Times, NPR, The Washington Post, The Sunday Times ( London) and a long list of other prestigious  publications. 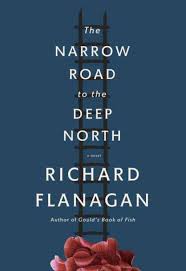 The novel wraps itself around the story of prisoners in a World War II Japanese POW Camp being brutalized in forced slave labor  to construct  the infamous Thai-Burma Death Railway.  Flanagan’s protagonist is an Australian physician , whose assignment is to make every effort to keep the prisoners alive only so that they can be returned to depravity cutting an impossible railroad bed through the Burmese jungle.

Readers who absorbed the brutality in the Japanese POW camps in the non-fiction books Unbroken  by Laura Hillenbrand or Fly Boys by James Bradley  I think will have had quite enough, without slogging through the excessive deprivation and savagery in Flanagan’s novel.  Surely, there is a parallel story here, an adulterous love affair between the protagonist and his uncle’s wife  frustrated by his supposed devotion to his wife despite a lifetime of promiscuity.  For me, this narrative did not connect or remotely rise above the books excessively redundant brutality.

Sorry, but if there is redeeming virtue in The NARROW ROAD to the DEEP NORTH, I seem to have missed the sign posts.

Richard Flanagan also wrote five additionaL highly acclaimed novels, Death of  River Guide, The Sound of One Hand Clapping, Gould’s Book of Fish, The Unknown Terrorist and Wanting.  I have not read any of his aforementioned books.

One thought on “SAVAGELY BEAUTIFUL….NO! SAVAGELY BRUTAL YES! THE NARROW ROAD TO THE DEEP NORTH”