I have two favorite mystery/ crime thriller authors, C.J. Sansom and Caleb Carr.  I had not caught up with Carr since reading  The Alienist and The Angel of Darkness. I just finished his latest, Surrender, New York.  While Sansom, a Brit, sets his novels of the Shardlake Series in England during the period of Henry VIII, Caleb Carr is very much American and very much New York. The setting for Surrender, New York is upstate in, of course, a town named Surrender. 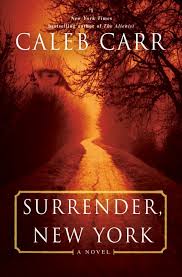 I will not attempt to put together a story line for you. That would be a disservice to Carr. You will quickly be captured by the pages of Surrender, New York and if you have not already done so will rush back to his earlier novels.

Want to know more about Sansom?  Since  you are already on the site, search here at gordonsgood reads.com The entire Shardlake Series, plus Winter in Madrid is here.