SHATTERED is certainly a read for enthusiasts of political intrigue. SHATTERED is not of the calibre of the late Richard Ben Cramer’s  WHAT IT TAKES or political writers  Caro, Goodwin or Meacham. However, Jonathan Allen and Amie Parnes tell an insightful story of the disastrous 2016 Hillary Clinton campaign for the presidency.  The book raises a fundamental question of whether Hillary lost the election at the hand of herself and her organization. 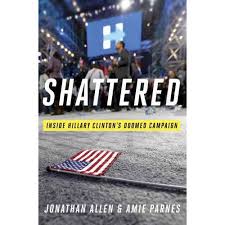 A fundamental paradox raised throughout the book is the modern campaign issue of  analytics  and algorithms versus street level  political acumen and gut feeling.  Just as  the media projections of the 2016 election failed because of too much reliance on polling numbers, the direction of  Clinton’s campaign fell upon the same sword.

The writing in SHATTERED casts a broader picture of the campaign than just the numbers. It tells of infighting, sycophants, personalities, favorites and internal  power struggles.

Why did Hillary fail in  what many considered an easy win against Donald Trump ? SHATTERED  offers some answers.