Jon Meacham has the academic prowess to place complicated issues into perspective through solid historical research.  Meacham has accomplished this once again in his new book THE SOUL OF AMERICA.  He removes a little worry and considerable angst from those who are gravely concerned about Washington, D.C. and President Trump.  This is an important read for all concerned American Citizens. 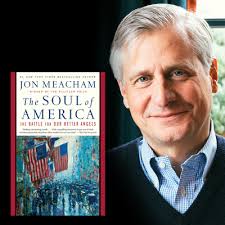 THE SOUL OF AMERICA is extremely well structured and I have chosen two paragraphs in hopes that I may entice you to read this work.

“Yes, much of the nation’s fate lies in the hands of the president, but the voters have the ultimate authority. The country has to awaken every now and then to the fact that the people are responsible for the government they get. And when they elect a man to the presidency who doesn’t take care of the job, they’ve got nobody to blame but themselves.” ( Harry S. Truman, post presidential notes. )

” We have managed , however, to survive the crisis and vicissitudes of history. Our brightest hours are almost never as bright as we like to think; our glummest moments are rarely irredeemable as they feel at the time. How, then, in an hour of anxiety about the future of the country, at a time when a president of the United States appears determined to undermine the rule of law, a free press, and the sense of hope essential to American life, can those with deep concerns about the nation’s future enlist on the side of the angels?”  (Jon Meacham)

After reading the perspective drawn from the pages of the SOUL OF AMERICA, I am betting that our “better angels” will enter the arena and prevail.