The prose is magnificent and the story ironically timely in these divisive days of 2015.  Twenty-one-years after its original publication in 1994 the story line is as prescient as then. Snow Falling On Cedars by David Guterson is an award-winning novel, the themes of which resonate today. 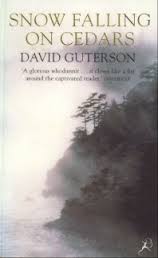 The writing captivates the reader from the very first pages. Outside the wind blew steadily from the north, driving snow against the courthouse. By noon three inches had settled on the town, a snow so ethereal it could hardly be said to have settled at all, instead it swirled like some icy fog.

As the story unfolds, a young Japanese man is accused of murder surrounded by the prejudice against all Japanese following the Second World War. A love affair between a young newspaperman and a Japanese woman, a trial, a community split apart and a  verdict.

No further spoiling of the story. It would be a travesty for me to do so. You will thank me for telling  you of my belated discovery of  Snow Falling On Cedars.  The novel was made into a movie directed by John Hicks and released in 1995.