I recommend another very good “HAMILTON”  read in addition to Ron Chernow’s popular biography.  MY DEAR HAMILTON, A NOVEL OF ELIZA SCHUYLER HAMILTON by Stephanie Dray and Laura Kamoie is an excellent work of well researched historical fiction. If you have not seen either the Broadway production or the movie HAMILTON read this novel first as a  guide through the nuances of the story line. Additionally, it is an excellent stand alone summer read offering insight not only insight into Eliza’s and Hamilton’s relationship and the Revolutionary War but also the life style of 18th century New York City and the wealthy Dutch plantations along the Hudson. 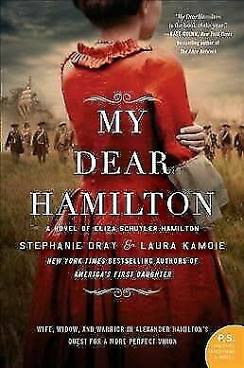 Another excellent Hamilton biography is ALEXANDER HAMILTON, A LIFE by Willard Sterne Randall.