The Art of Fielding by Chad Harbach
Adult Fiction

I was honored a few months back when Gordon asked me if I would be a guest blogger on Gordon’s Good Reads. I am, however, a young adult school librarian by trade and as a result I spend most of my time reading young adult fiction and nonfiction. The Hunger Games? I’ve probably read the first book in the trilogy six times. I have always been an avid reader and I do read an adult book every third book or so―I just had to wait for the right book to come along in order to honor Gordon’s guest blogger request. Well, it has. The Art of Fielding by Chad Harbach is a stunning book. It’s got everything―phenomenal characters, a little Moby Dick and Melville lore, romance, and baseball. I don’t even particularly like baseball, but I longed to be a member of a baseball team while reading this amazing novel. 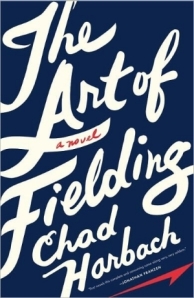 It all starts with Mike Schwartz, aka Schwartzy. He’s a born leader, or more accurately a natural coach from a hard-knock background. He also happens to be a sophomore at Westish College, a small liberal arts college on the shores of  Wisconsin’s Lake Michigan, when he spots Henry Skrimshander playing baseball at a summer tournament. Henry is a shortstop, small and rather scrawny, but with an uncanny ability to field a baseball. Schwartz recruits the recent high school grad for the Westish Harpooner’s Division III baseball team. Henry is not much of a student, in fact the only book he has ever truly read is his dog-eared copy of The Art of Fielding by Aparicio Rodriguez, where Rodriguez, the greatest defensive shortstop who ever lived, manages to successfully equate the act of fielding a baseball with a Zen-like practice. Henry has committed to memory most of the numbered bits of advice, such as:

59. To field a ground ball must be considered a generous act and an act of comprehension. One moves not against the ball but with it. Bad fielders stab at the ball like an enemy. This is antagonism. The true fielder lets the path of the ball become his own path, thereby comprehending the ball and dissipating the self, which is the source of all suffering and poor defense.

When Henry arrives on campus and meets Owen, his beautiful, biracial, gay roommate,  we, as readers, are reassured that Henry will survive his new circumstances when he spots Owen’s own copy of The Art of Fielding on his meticulously kept bookshelves.
It is on the Westish campus that we get to know Mike, Henry, Owen, President Affenlight and his daughter Pella(escaping a failed marriage), as well as the entire Westish baseball team. And lest you think that baseball is the only glue that holds the novel together, Harbach has had fun incorporating myriad literary references . Although Westish could be any struggling small liberal arts college, Harbach  created a singular, distinctive institution. The Westish Harpooners are a purposeful reference to Herman Melville’s Moby Dick. It was President Affenlight, as an undergraduate at the college, who discovered a ream of papers in the library which turned out to be a transcript of a speech given by Herman Melville when he visited the college in 1880. Westish College made the most of the Melville association, as did Afflenlight himself, who went on to become a renowned academic, the pinnacle of his career being the widely acclaimed scholarly book called The Sperm-Squeezers. His career come full circle, he is back as president of the college where he began his academic pursuits.
The characters, both on and off the team, intersect and cross paths, with the meteoric rise of the Harpooners in the league standings serving as backdrop. Henry’s career is on the rise as well―scouts flock to game after game,  promising vast sums of money when he gets signed to the major leagues. But then Henry comes down with Steve Blass disease (named for the infamous Pirates pitcher who, all of a sudden, could no longer throw the ball accurately). Henry has fallen off his path, he has lost The Way. As he struggles, the other characters meander along their own paths, each trying to field their own game, so to speak. This is one baseball story that left me wishing there were a few more innings.

Wonder. Thanks RO. You are welecome at GGR anytime! Keep reading!