The Da Vinci Code, The Lost Symbol and now  Dan Brown’s Inferno, another thrilling novel that will surely fly off the shelves and dominate downloads in the days and weeks ahead. 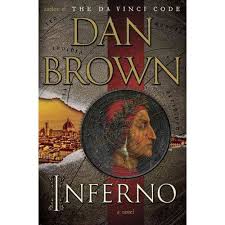 Inferno is art, history, science and a travelogue through Florence and  Venice worthy of being transplanted to the pages of a Fodors Guide.   For fans of Dan Brown, Inferno is so fast paced that the book is a three or four session read, thrilled to follow the familiar exploits of Harvard University professor of symbology  Robert Langdon.

Brown’s multiple short chapter writing style  keeps the reader connected  despite the speed with which the plot evolves.   Fair warning, assume nothing and expect to be deceived again and again as this thriller develops.  Typical of Brown you will never know who is friend or foe until the very conclusion. Paging ahead is forbidden!  You will learn more about Dante Alighieri’s  The Inferno, and the seven rings of Hell than previously imagined and be exposed to Italy’s art and architectural treasures that are alive in the narrative.  Those who have traveled to Florence ,Venice  and Istanbul will be transplanted, imagining the  tale with even greater intensity.

Beyond the expected suspense and surprises, Inferno adds a Transhumanist dimension of  cutting edge scientific technologies that are unimaginable,  calling into question enormous moral and ethical issues in facing  threats to the world’s population. ” You know that nature has always found a way to keep the human population in check–plagues, famines, floods. But let me ask you this–isn’t it possible that nature found a different way this time?”

With the  popularity of The Da Vinci Code , The Lost Symbol, Angels and Demons,   and now Inferno  do not overlook an earlier great Brown novel, Digital Fortress.  Familiar themes and an ever-present ” mystery container” that can wreak havoc on the world. Brown also wrote Deception Point, which I have not read.

When I return to Venice I am convinced I will see Robert Langdon in St. Marks Square and just perhaps,  as the violins play, he will be holding Sienna’s hand.  I hope so!  You will understand.