President Lincoln’s brilliant decision to elevate Ulysses  S. Grant to General in Chief of the Union Army following Grant’s victory at Vicksburg on July 3, 1863 was further justified by the success of Grants first assignment following his promotion in the battle of Chattanooga, Tennessee. 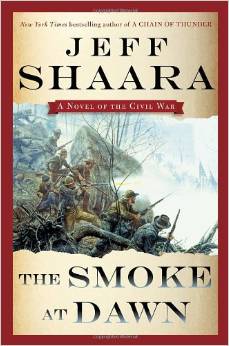 Jeff Shaara in his new historical novel The Smoke at Dawn , the third in his Civil War Trilogy, places Grant in the Cumberland following the Confederate defeat of General Rosecrans by Braxton Bragg at the Battle of Chickamauga Creek. Grant immediately demoted Rosecrans and replaces him with General George Thomas and brings in Sherman’ s army for support. The Union army has been under siege in Chattanooga and Grant orders the siege broken at whatever the cost. Bragg, sinking in his own bombast and his repeated failure to lead , is on the verge of converting a great Confederate victory into a bitter defeat. As Sherman rides to the rescue  of General Thomas and the Union Army, he makes a rare mistake by misreading the geography, giving Bragg one last chance of grasping victory from the jaws of defeat.

There is plenty of drama as Shaara tells the story of this epic battle with the versatile vehicle of historical fiction that , following in his fathers footsteps , is his trademark. Shaara is the son of Pulitzer Prize winning Michael Shaara, author of The Killer Angles.

The two previous novels in the trilogy are A Blaze of Glory , the battle Shiloh and A Chain of Thunder, the Siege of Vicksburg.  Search gordonsgoodreads.com reads for other Jeff Shaara historical novels based upon the Revolutionary War, Civil War and World War II.