Howards End, first published in 1906, is E.M. Forster’s fourth novel and quickly placed him among the elite English writers. Indeed, this is a classic English novel! Some patience is advised for those who have not delved into this genre but once the plots and sub-plots are established and the characters evolve this great read unfolds rapidly into hours of enjoyment. The language of the period is rhythmical and you will quickly become accustomed to ” Crane is bringing the motor around.” 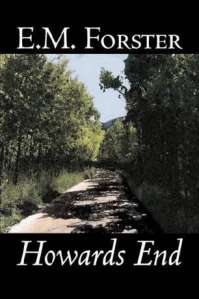 Most recently, in large part because of Downton Abby , much of  the focus on English society has been on the aristocracy. In writing  Howards End, Forster is unveiling not the aristocracy but the class warfare in the emerging English middle class, set among those in the mercantile order of  British society.  It is also very clearly exposes the  social  war between men and women over power within the households of the rich, moderately wealthy and the poor.

Forster tells the story through the voices of two sisters, immigrants to London from a well established and sophisticated German family. One has an illicit affair during a summer excursion with  the son within an upwardly mobile English businessman.  The second sister  ends up marrying the father following the death of his wife in a marriage that is more of an arrangement than a love affair. And so Howards End passes through further affairs, children out-of-wedlock, and the resolution of who will inherit Howards End, the generational family country home.

There is a sexual theme throughout the novel but don’t look for Lady Chatterley descriptions or dialogue. In this novel , love and sex is all about impact on ones status in society, nothing physical , with all detail in the imagination.  Forster treats the subject much like Henry James , always there but never explicit.

The late 19th and early 20th Century saw an explosion of great English novelists and E.M. Forster ranks  well among them.  Howards End is listed as 38th among the 100 best novels of the 20th Century. A Room With a View by Forster is ranked 79th. Forster’s final novel, A Passage to India written in 1924, ranks 25th on the Modern Library’s list.