Katherine Boo’s best seller Behind The Beautiful Forevers, Life, Death and Hope In a Mumbai Undercity is a shocking examination of how income inequality can condemn hundreds of thousands of humans, men, women and children,  as slum dwellers with no possible exit from their condition.  After completing Behind The Beautiful Forevers I wondered why the author placed the word HOPE in the title, as I came away with none.

Boo illuminates the contrast in India’s caste system by establishing her story line in a Mumbai slum, Annawadi, beneath the shadow of India’s “other world”, the gleaming high-rise hotels that surround the international airport.  In Annawadi,  young and old, mothers, fathers and children live at the edge of a sewage lake in cardboard and tin shacks with no walls, doors or plumbing. Boo takes the reader through their daily lives of survival, picking through the garbage and waste of the upper classes and ironically paying bribes to the political bureaucracy for the privilege!

Hope?  Farmers borrow money to remain on their farms to avoid  conditions in the cities like Mumbai. Then, crop failure, a huge loan for seed with no way to pay. ” He was slow-minded, short on his lights and worked the fields, then took additional loans for his daughter’s wedding and felt trapped. Then he went and drank the poison ( insecticide).”

Hope?  ” When a new school opened in the pink temple by the sewage lake, many of them gravitated to it, but it closed as soon as the leader of the nonprofit had taken enough photos of children studying to secure the government funds.”

Hope ? Boo details a society in which the poorest of the poor must pay bribes for the  most basic essentials in life, including food, water, the privilege to work, and inadequate medical care.

The very same week I completed Boo’s book, the March 30th addition of The Economist arrived at my desk with the headline CAN INDIA BECOME A GREAT POWER?  Behind The Beautiful Forevers makes a commanding case for a resounding NO! 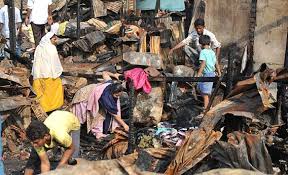 Katherine Boo is a staff writer for The New Yorker and a former reporter for the Washington Post. She has received a Pulitzer prize for her journalism.  This work of non-fiction is also worthy of high honors.  It has already been granted a National Book Award. Author Adrian Nicole Leblanc said it best in her praise for  Boo, ” There are books that change the way you feel and see; this is one of them.”