Author Mike Maden has stepped in to write the latest in the TOM  CLANCY series. Mark Greaney has written the majority of the books since Tom Clancy died in 2013. Greaney also co-wrote with Clancy LOCKED ON and THREAT VECTOR.

POINT OF CONTACT is right on target with the Clancy series timeliness. The story line incorporates North Korea and the illicit sale of technology and materials through the Chinese and other nefarious back alley characters including of course, Bulgarians!

As readers of this blog are well aware, I am a long time Clancy fan. However, POINT OF CONTACT is a little thin by comparison, but nonetheless, fans may wish to add it to their list. There is still plenty of action though you will find the gripping suspense a little lacking.

Tom Clancy fans, myself included, will not be disappointed as familiar characters return in the page turning action to which readers have become accustomed in Greaney’s writing.  Few, if any, wasted paragraphs.

The timely plot is of course North Korea. The new Supreme Leader Choi-Ji-hoon is more malevolent and even less stable than his deceased father. Driven to build a nuclear ICBM delivery system, Choi-Ji-hoon drives his subservient ghouls into a fiendish plot to source the   cash to fund the project, through the discovery of valuable heavy metals in the mountains of the north.

Profiteers join with America’s natural enemies in an unholy alliance with the North Koreans to carry out the complicated task of mining, marketing and converting into cash this new exploitable resource.

Enter ” The Campus” and  POTUS in an alliance to stop the madness. Mark Greaney’s research and storytelling  approach cable news reality!  Tom Clancy fans will enjoy every page, satisfied that there will be still more of this great series.

So much written in the Tom Clancy novels is prescient and his final book, Command Authority, written before his death in late 2013 , is no  exception.  The latest Jack Ryan novel written with fellow writer and researcher Mark Greaney is all about the future aims of Russia connected to the emergence of the Russian mob following the collapse of the USSR.  Who fills the vacuum and what are the aims of Clancy’s new villains?

Clancy casts a wide net in Command Authority including  Swiss bankers and secret organizations formed from the remnants of the old KGB.  There is government corporate takeovers with millions of unaccounted funds to trail to money laundering though numbered  Swiss accounts.  Topping the  greed list is the lust for power by the new elite in the Kremlin eager to reclaim lost Russian territory and international prestige. Of course there is abundant hardware in hand and in the air.

In the middle of all of the intrigue is President Jack Ryan, Jack Ryan Jr. and of course  important roles for John Clark, Ding Chavez, Dominic Caruso and Sam Driscoll. Clancy cleverly creates a flash back sub-plot to Jack Ryan Sr’s  former career at CIA in England which directly connects to the present day un coverings there by his son Jack Ryan Jr.   The stories intersect perfectly in typical Clancy fashion.

For Clancy fans, place me at the top of the list, it is sad contemplate the end off this wonderful series.  It has always been difficult to choose favorites because each resonates with its place in time.  Tom Clancy was brilliant in introducing his characters squarely in the middle of the action , always on the edge of reality.  I will miss wondering if the Clancy story unfolding in his novels will be on the front page of the morning paper.  In many cases Tom Clancy has come very close!

I have previously referenced in an earlier post the pleasure of reading fourteen Tom Clancy novels in sequence! The characters appear and re-appear and of course there is the ever-present Jack Ryan as in the case of last year’s Dead or Alive.( See earlier Tom Clancy Blog).  Against All Enemies is written with Peter Telep 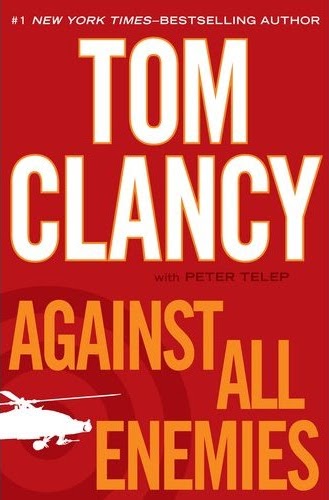 I have just completed Against All Enemies sans Jack Ryan but ex-Navy-Seal  Maxwell Moore carries forward Clancy’s genius for crafting fabulous thrillers. A warning, when you arrive at Chapter 42 clear your schedule because you will not be able to put this book down until the last page.  If you love Tom Clancy do not leave for summer vacation without Against All Enemies.

Those of us who have already read Dead or Alive will have to wait for the next Clancy volume to find out who wins the election!