Jacob Riis’s book How The Other Half Lives, written in 1890, remains an outstanding example of the importance of investigative journalism and the continued vitality of the Fourth Estate.

Jacob Riis was among the earliest of what Theodore Roosevelt later termed ” muckraker”, “taking the rake to uncover the most unpleasant conditions in American society.”  In Riis’s case, the issue was the plight of thousands of immigrants living and working in horrid conditions in the New York City tenements of the late 19th century. How The Other Half Lives is not a historical novel but rather a work of non-fiction, well researched reporting, personally witnessed by the journalist.

Riis was himself an  immigrant, born in Denmark among a family of fifteen children. He apprenticed as a carpenter in Copenhagen but discouraged by job availability he immigrated to the United States in 1870 at age  21.  Having caught a brief glimpse of the squalid living conditions among immigrants in New York’s tenement district, he left for western Pennsylvania and found work there as a carpenter. Perceived as being taken advantage of by his employers, he returned to New York as a salesman of flat irons whereupon he saw an advertisement for a Long Island newspaper looking for an editor. Thus, with no experience as a writer, he began his career in journalism.  He later accepted a position as a reporter for The New York News Association where he began writing with assignments covering both the rich and the impoverished. Riss was aware of conditions among the extremely poor in New York from his previous brief stay in and around the notorious Five Points. However, his job at the NYNA, the New York Sun and later in a big step up to the New York Tribune , he found a pulpit from which to begin informing the public on How The Other Half Lives .  Riis turned his print platform into a personal crusade, attempting  to alleviate the bad living and working conditions of the poor by exposing their horrid circumstances to the people who could make a difference, the middle and upper class of the city and its political establishment. Riis was perfectly willing to hold both the upper class and politicians accountable for the exploitation of men, women and children in both employment and housing. The pages of his early articles for Scribner’s Magazine and later in the complete volume How The Other Half Lives  are so vivid that uninformed critics, in disbelief, termed the details of his reporting an exaggeration and sensationalism.

Surely this work is an early reformist look at income inequality but  Riis referred to this large percentage of the New York City population as a class  unto itself, literally without identity or voice, enslaved by landlords who exploited their fears. The same people were recruited as the machinery of piecework in the early garment and cigar making industry at wages below any standards of decency.  The tenement  districts in New York exploded with thousands of men, women and children crowded into one or two rooms often without ventilation, sanitation or running water. Riss estimated that at one fifth of the city’s population lived under these conditions.

There is a major difference between Riis’s reporting and sensationalism. Riis spent months in the tenements, which were factories by day and barely livable sleeping quarters by night.  His research was impeccable and he was among the very first reporters to incorporate photo journalism into his stories, utilizing the newly invented flash to photograph his subjects in their darkened rooms. His work was the beginning of photo journalism, adding documentation to the written word.  The photos and editorial content had dramatic impact with his readers  and ultimately gained the attention of New York’s newly elected Police Commissioner, Theodore Roosevelt.  Riis became an advisor to Roosevelt, escorting him on nighttime  tours for the commissioner to see for himself how the poor were forced to live.  Many credit this educational relationship with Roosevelt as the beginning of the Progressive Movement, a hallmark of TR’s future  presidency.

After Roosevelt’s election he wrote this tribute to Riis. ” Recently a man, well  qualified to pass judgement, alluded to Mr. Jacob Riis as  ‘ the most useful citizen of New York.’  The countless evils which lurk in the dark corners of our civic institutions, which stalk abroad in the slums, and have their permanent abode in the  crowded tenement houses, have met in Mr. Riis the most formidable opponent  ever encountered by them in New York  City.”

How The Other Half Lives was first published as an article in Scribner’s  Magazine in 1889, but  while working for the New York Sun, Riis expanded the work into the book, complete with his photographs and published it a year later.  A much less famous work by Riis, Children of the Poor was published as a sequel in 1892. In it Riis wrote of children he had encountered while researching How The Other Half Lives. 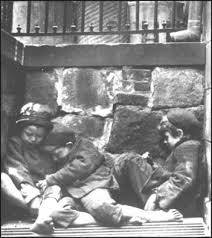 Riis was not alone among a new breed of investigative {muckraker) journalists.  In 1872 Julius Chambers wrote an expose of institutional horrors in Bloomingdale Asylum  and in 1887 Nellie Bly wrote Ten Days in a Madhouse a story of patient abuse in Bellevue Hospital.   By the turn of the 20th century McClure’s Magazine had assembled a group of new muckrakers including Ida Tarbell, Lincoln Steffens and Ray Stannard Baker, exposing the Standard Oil Trusts and labor unrest in the coal mines and steel mills.

One wonders  how slowly  reform among the immigrants of New York’s tenements may have come without the reporting of Jacob Riis.  How The Other Half Lives  punctuates the importance of  investigative journalism in the fabric of a democracy. In the 20th Century we saw the results of the journalistic work of the Washington Post’s  Ben Bradlee, Bob Woodward and Carl Bernstein in their reporting of Watergate.  Currently we are witnessing excellent journalism in the New York Time’s recent series Invisible Child, the brilliant work of reporter Andrea Elliott and the ongoing reporting of Times business journalist Gretchen Morgenson,  together with her book Reckless Endangerment.

In this readers view, Television, the 24-hour cable news cycle and the endless world of blogs have a long distance to travel before coming close to the credibility and impact  of the work of Jacob Riis and those following in his footsteps.  If you are a  student of New York, treat yourself to a journey back to the nineteenth century and read How The Other Half Lives.  It will make you want to keep buying a newspaper, print or digital!